He’s a former goalkeeper at UNC-Asheville, but apparently Hurskainen has spent as much time shooting at the pipes as diving between them.

What’s that? You want more?

That  might be the best thing to come out of Finland since Jari Litmanen.

Unlike college basketball or football players, NCAA soccer players can transfer from one school to another without having to sit out a year. North Carolina coach Carlos Somoano is certainly happy about that exemption: He used it to land striker Ben Speas, a junior who won a national championship with the University of Akron last season.

In the Tar Heels’ semifinal match against UCLA on Friday, Speas set up a goal and buried the game-winning penalty in the shootout after extra time (the match had finished 2-2).

In last night’s final, Speas scored the goal in Carolina’s 1-0 win over upstart UNC Charlotte, delivering the NCAA title to Chapel Hill for the first time since 2001.

The Tar Heels had reached the semifinals in each of the previous two seasons, and fell in the final in 2008. 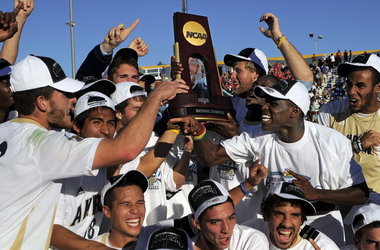 One year after losing the NCAA championship on penalties, the Akron Zips returned to the title game and took home the first D-I trophy in school history, downing previously unbeaten Louisville 1-0.

Midfielder Scott Caldwell scored the winning goal in the 79th minute, collecting the rebound of his own shot and driving it into the top of the net over Cardinals keeper Andre Boudreaux.

Louisville nearly equalized several times after Caldwell’s strike, including in the 89th minute, when Aaron Horton’s shot was saved off the line by Akron defender Chad Barson.

Louisville (20-1-3), led by former Akron coach Ken Lolla, was attempting to become the first undefeated champion since Santa Clara in 1989.

On an Akron team that features multiple quality pro prospects, including U.S. Under-20 players Perry Kitchen and Zarek Valentin, Caldwell was an unlikely hero. But it’s a role he’d grown accustomed to during the Zips’ stretch run: Sunday’s winner was his fifth career goal—all of them scored in the past seven games, starting in the Mid-American Conference tournament.

Overall, the game was well played and a decent showcase for college soccer, which, as we touched on in this week’s MLS column (go check it out here), takes its share of criticism in U.S. soccer circles.

Sure, the college game may not be the best breeding ground for future pros, but it’s better than people give it credit for.

If you compared yesterday’s title game with, say, Colchester vs Yeovil Town in England’s League One, well, the college boys may or may not be able to beat their third-division pro counterparts across the pond, but they definitely play a more attractive, skillful brand of soccer.

Beyond that, the college game is growing. Of the millions and millions of youth players in this country, only a relative handful wind up at Bradenton or on the fast-track of an MLS academy team. The rest head for college—an ingrained rite of passage in the U.S.—and they’re producing quality teams in previously undeveloped soccer areas all over the country.

This year’s runner-up, Louisville, is just the most notable example. The Cardinals have a long tradition of basketball glory, yet here they were coming within a couple of missed chances of a national soccer title.

Michigan, which didn’t even have a D-I soccer program until 2000, reached the College Cup this year, narrowly losing to Akron.

No, NCAA soccer is not on par with a pro developmental program, but it’s not a bad alternative for a player who’s not quite ready to go pro at 18—and it’s never been more competitive.

Here is a brief ESPN recap of the game: 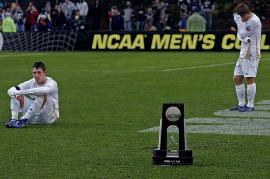 Akron fell just short of an unbeaten season and a national title.

Akron made it through the entire NCAA tournament, including both the semifinals and the final, without conceding a goal. They won tournament games by blanking South Florida, Stanford, and Tulsa, and they held ACC powers North Carolina and Virginia scoreless in the College Cup this past weekend in Cary, North Carolina.

Unfortunately for the Zips, they failed to score a goal during final-four weekend, and so they went home yesterday as national runners-up while Virginia took the championship game on penalty kicks.

The Zips beat Carolina on penalties in the semis in what may have been the game of the tournament, full of crisp passing and fluid movement. The final was much more buttoned-up, as Virginia, which built an 11-game shutout streak this season, stifled every Zips foray into the final third. Akron didn’t get a single clear-cut chance on goal. After bouncing a header off the Akron post in the first half, Virginia didn’t threaten much, either. The teams were evenly matched, with both lacking that player with an extra bit of quality to unlock the opponent’s backline.

When Akron junior midfielder Blair Gavin, who’d nailed the clinching penalty in the semis versus Carolina (and was 5-f0r-5 from the spot for the season) skied his PK over the bar, Virginia burst into celebration of the school’s first national title since the Claudio Reyna-led dynasty in the early 1990s.

Look for the Zips to bounce back nicely, though, even if they do lose coach Caleb Porter to D.C. United, as reports are suggesting could happen. Their stingy back five, which gave up only seven goals in 2,300 minutes of play this season, features a freshman in goal (David Meves), and two others in defense (Zarek Valentin and Chad Barson) alongside sophomore Kofi Sarkodie and junior Chirs Korb. In other words, goals against Akron will be scarce again next season. Maybe not 0.27-per-game scarce (the third-best goals-against average in NCAA D-1 history) but scarce nonetheless.

Virginia, which began the 2009 campaign with three straight preseason losses, built momentum gradually and peaked when it needed to. The Cavs will likely welcome back their top two scorers, freshman Will Bates (12 goals) and sophomore Tony Tchani (8 goals, 4 assists), along with redshirt-junior goalie Diego Restrepo, who had a school-record 16 shutouts this season. Virginia’s g.a.a. for the season was also 0.27, just fractionally behind the Zips’ mark, and fourth-best in NCAA D-I history.

Small wonder the final was a goalless draw. 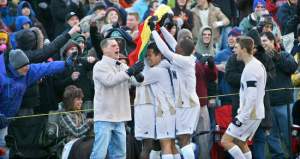 College soccer has long been criticized in U.S. footie circles, mainly for being a pale substitute for a professional environment for developing players. That may be true, but NCAA ball still has managed to produce its fair share of quality pros, from Claudio Reyna (three seasons and three national titles at the University of Virginia) to this year’s MLS Rookie of the Year, Omar Gonzalez (three years and one NCAA championship at Maryland), to Gonzalez’s fellow MLS newbie Steve Zakuani, who jumped to the league after two seasons with the University of Akron Zips.

Last night the Zips, owners of the best nickname and the best record in college soccer, advanced to the NCAA semifinals with a 1-0 win over Tulsa. The Zips stand at 23-0 and will face North Carolina (16-2-3) for a berth in the national-title game. Their current win streak ties the 1997 Indiana team’s mark for the longest winning streak in a season. North Carolina knocked off surprising Drake (Hate the Drake! Love the Drake!) 2-1 to reach the semifinals. Drake is in Des Moines, Iowa, by the way, and is a rising program under coach Sean Holmes, having qualified for the NCAA tournament in each of the past two seasons.

The other semifinal pits ACC rivals Wake Forest and Virginia against one another in what will be their third meeting of the season (Virginia won the first two). Both teams are 17-3-3 and Virginia keeper Diego Restrepo is riding an 11-game streak of clean sheets. He has not allowed a goal since October 17.

Backpost sees the Tar Heels springing a mild upset next weekend against Akron to advance an all-ACC final with Virginia.