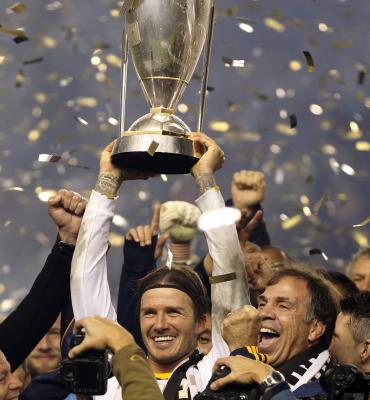 Now that the Paris St. Germain deal is officially off, the path is clear for David Beckham to rejoin the MLS champion Los Angeles Galaxy, right?

You would think so, but a new MLS deal has yet to be announced. While saying he has every intention of getting it done, AEG President Tim Lieweke sounded some cautionary notes in an interview with the LA Times yesterday:

“The stories were all over the front page of every newspaper in Europe that he was going to Paris; I told everyone I would not pay a lot of attention to that. And now that the stories are that he is going to the Galaxy, I would repeat the same advice: Premature.”

Lieweke added that the situation is “heading in the direction” of a new deal for the 36-year-old Englishman, but emphasized that the contract is not done. Yahoo Sports reported that LA had offered a one-year $6.5 million deal that allows Beckham time off for the 2012 London Olympics. But Lieweke told the Times there was more to the deal than those elements:

“We have the added complication that David has the right to purchase a franchise in this league. There are a lot of issues we are going through. We are committed to David and he has always felt strongly about the Galaxy in LA, and it does not surprise me that his family would prefer to stay in LA. But we’re not done yet.”

It’s interesting to us to hear people talk about Beckham “leveraging” his LA situation with the PSG offer (and, reportedly, others).

Is he really concerned about squeezing another million out of AEG? With a net worth of around $220 million (up to $271 million, if you count his wife’s income), and the league (and club) accommodating his request for time off for the Olympics, and enabling him to purchase a franchise down the road, does he really care about the salary figure? He already turned down almost twice his 2011 salary from PSG.

We’re not experts on these issues, but we’d guess it’s more a question of dotting legal ‘i’s’ and crossing contractual ‘t’s’ than negotiating dollar amounts. Or we’d hope so, anyway.

The Denver Post is reporting that the Colorado Rapids’ have finally settled on a replacement for ex-coach Gary Smith, who departed on acrimonious terms in November, just one year after winning the 2010 MLS Cup. Their new man: FC Dallas assistant and Academy Director Oscar Pareja.

Pareja, a former Colombian international who played eight seasons in MLS with New England and Dallas, beat out a short list of candidates including Denis Hamlett, Tom Soehn, and Richie Williams.

Neither FC Dallas nor Colorado would comment on the report, but Rapids President Tim Hinchey said the club would have an announcement this week.

There has also been widespread speculation that outgoing U.S. U-17 coach Wilmer Cabrera, also a former Colombian international, would join Pareja as an assistant coach in Colorado.

FC Dallas locked down a berth in the 2011 MLS Cup playoffs last night with a convincing 2-1 win at Chicago’s Toyota Park.

The Hoops dominated the opening 45 minutes, gettting a goal from Jackson just before halftime and one from Daniel Cruz just after the break.

Sebastian Grazzini pulled one back for Chicago with a brilliant effort in the 86th minute, but it was too little too late for the home team, which was down to 10 men at that point after Pavel Pardo had been shown a straight red in the 79th.

The Fire now stand six points shy of the playoffs with two games to play, and will be eliminated from the postseason if New York wins or ties at Kansas City on Saturday afternoon. In other words, they whiffed in—as Chris Russo would say—a big spot last night, at home against a team that entered the game on a four-game losing streak.

In Vancouver, the Whitecaps won their second straight game at their new digs, clipping the wings of DC United’s playoff hopes with a 2-1 triumph at BC Place.

We’ve said before that Vancouver might be the best last-place team in MLS history—only now they’re no longer in the cellar. Last night’s win gave the Caps 28 points for the season, one more than New England.

In any event, they are, despite their 6-16-10 record, a dangerous and entertaining side—an ideal spoiler for teams with playoff hopes, as DC discovered. They’re fired up to defend their new home turf, and they have the talent to do it—even without playmaker Davide Chiumiento, who was left out of the 18 last night due to an attitude issue, apparently.

No matter: the Caps scored 40 seconds into the game, when Camilo got on the end of a fine cross by Jordan Harvey (who seems to be enjoying the move from left back to left midfield) and turned in his 12th goal of the season.

Vancouver proceeded to dominate the first half, knocking the ball around crisply, and then, just seconds after the break, the Caps produced an almost exact replica of their opener, with Alain Rochat finding Long Tan for a header to make it 2-0. It was Tan’s first career MLS goal and it was also the first goal by a Chinese-born player in MLS history.

United defender Brandon McDonald made it 2-1 with a 58th-minute header, and DC had a penalty shout in the 76th, when a shot ricocheted off Caps midfielder Jeb Brovsky’s arm, but the pleas were waved off and Vancouver held on to win.

United—which played last night without Dwayne De Rosario, who suited up for Canada in Toronto on Tuesday—is five points off the playoff pace with three games remaining, all at home.

• Apparently, there’s discord in Denver, where Colorado Rapids coach Gary Smith is citing a “relationship issue” that could prevent him from continuing to work with Rapids’ technical director and former U.S. international Paul Bravo. (Denver Post, via MLSSoccer’s Kick Off.)

“We need to be able to come to terms with what both of us are at the club, or we need to move on,” Smith said. “One of us does, anyway.”

Not the best way to head into tomorrow night’s Rocky Mountain Cup game against Real Salt Lake, where a victory would clinch a playoff spot for the defending champs. (RSL is already in the postseason.)

• Galaxy striker Robbie Keane’s injury is worse than first reported, and Republic of Ireland manager Giovanni Trappatoni is not happy that the player went the full 90 against Andorra last Friday instead of reporting the injury and coming off. The coach said Keane “made it worse” by playing a full game with the injury.

No word yet from Los Angeles coach Bruce Arena on the prospect of competing in the playoffs without his top striker.