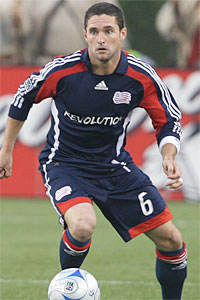 In somewhat of a surprise move, the New England Revolution have reportedly hired former Revs defender Jay Heaps to replace Steve Nicol as head coach of the team.

Heaps, 35, retired as a player in 2009 and spent the past season as the color commentator for the Revolution’s local TV broadcasts. He has no coaching experience.

He does have a 10-year MLS career under his belt, during which he set the club record for appearances (294), scored 17 goals from his right back position, and earned four caps for the U.S. national team.

Nicol was dismissed after the Revs finished tied for last in MLS with a 5-16-13 record.

The hyper-athletic Heaps was a striker at Duke University (where he also played basketball, as a walk-on), but was converted to outside back in the pros.

He went to NCAA Final Fours with both the basketball and soccer teams at Duke. 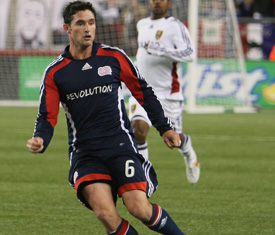 The Boston Herald is reporting that ultra-athletic New England Revolution defender Jay Heaps will announce his retirement at a press conference later today. Heaps began his career with the Miami Fusion in 1999, winning the MLS Rookie of the Year award that season. The following season he was an MLS All-Star, and in 2001, he was traded to New England, where he became a fixture on the backline, appearing in four MLS Cups (all Revs losses), winning the 2007 U.S. Open Cup, and the 2008 SuperLiga title. This past summer, Heaps got his first national-team call-up, appearing in four CONCACAF Gold Cup games. In addition to being a four-time All-ACC performer in soccer for Duke, the 5-9 Heaps played three seasons with the Blue Devils basketball team, on scholarship, as guard.