It arrived about 40 minutes into the broadcast, and it was every bit as hollow, unwarranted, and harsh to the people of Chicago as we thought it would be.

What’s that? We mean Cleveland, not Chicago?

Oh, were you thinking of this Decision—the most stilted, unnecessary, and self-centered hour in recent sports history? That Decision, in which LeBron James broke up with the city of Cleveland on national TV, saying he “took the franchise to places it had never been before [girl].”

Really LeBron? Check with Craig Ehlo, Larry Nance, and Mark Price—Cleveland has had its share of trips to the Land of Playoff Also-Ran. It’s nothing new to them. Okay, you had the one NBA Finals appearance, against San Antonio in ’07. And what happened? Swept. Four and out. Thanks for playing, safe travels. And you never went back, and you disappeared in this year’s postseason.

Here’s hoping for more of the same after you “take your game to South Beach.”

(Click here for a very funny live chat on the whole sham; worth a read.)

Now, where were we? Right, the Decision, by referee Terry Vaughn, to award Real Salt Lake a penalty in the 40th minute of last night’s MLS game in Chicago. 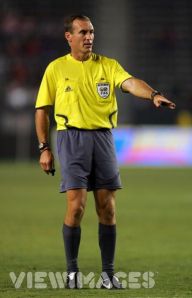 The first half was moving along uneventfully, with injury-depleted Chicago  holding its own against a surprisingly listless Real Salt Lake. Then South Africa 2010 alum Robbie Findley made a move in the box, got the slightest of challenges from veteran Fire defender C.J. Brown, and went down like a sack of rocks.

His embellishment was enough to draw a whistle from Vaughn, who’s done this before, and Findley slotted the ensuing penalty into the lower right corner.

Two minutes later, Findley showed that he’s not just a poor finisher at the international level, he can flub great chances in MLS too: he hesitated on a clear breakaway and never got a shot off, squandering what should have been RSL’s second goal just before the break.

The game picked up considerably in the second half as Chicago brought on Brian McBride and Justin Mapp and took the game to the visitors. Alas, they couldn’t find the equalizer, despite the excellent efforts of rookie right back Steven Kinney, who was making his MLS debut.

We’re awaiting word back from the Elias Sports Bureau, but we think it’s a safe bet that Kinney is the first player to hit the post twice on separate headers during his professional debut. He headed two corner kicks by Mike Banner off the post—first the right, then the left.

But both balls were cleared out of danger, and RSL held on to its 1-0 lead until the final whistle.