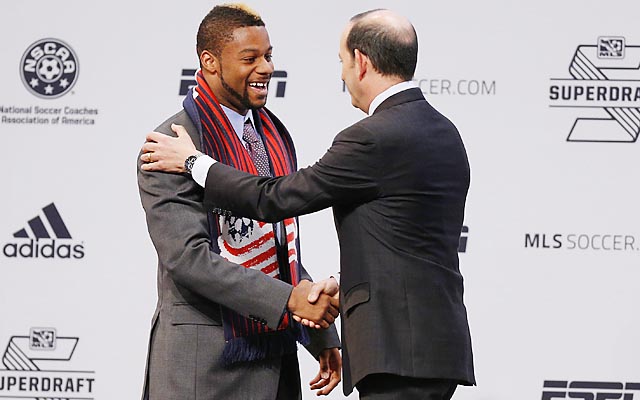 Louisville and Georgetown—two schools more commonly known for their basketball programs than for soccer—featured prominently in the 2013 MLS SuperDraft as the Cardinals and Hoyas each had three former players selected in Indidanapolis yesterday.

Louisville defender Andrew Farrell (above left) was the No. 1 pick, going to the New England Revolution, which traded up to get him, swapping the No. 4 selection and allocation money to Toronto FC for the first draft position.

Farrell, 20, was born in Kentucky but moved to Peru with his parents, who are missionaries, for 10 years of his childhood. He returned in his teen years and played at Atherton High School in Louisville before joining the recently ascendant Cardinals program.

He’s an athletic defender with decent feet who can play center back or outside back. He also played in midfield for much of his senior season at Louisville. In his junior year, Farrell was the Big East Defensive Player of the Year, and he was a first-team All-America and Hermann Trophy semifinalist this past season.

Louisville, which reached the final eight of the 2012 NCAA tournament, had two other players selected as midfielder Paolo DelPiccolo went in the second round (27th overall) to Montreal, and defender Greg Cochrane went 38th to Los Angeles. The Cardinals had four players picked in last year’s draft, including MLS Rookie of the Year contenders Nick DeLeon (DC United) and Austin Berry (Chicago).

The Cardinals’ Big East rival Georgetown, which reached the 2012 NCAA final, narrowly losing to Indiana, had a first-round selection in defender Tommy Muller, who went to San Jose with the 15th pick, and two second-rounders in midfielder Ian Christianson (New York, No. 22), and defender Jimmy Nealis (Houston, 37).

After New England selected Farrell, Chivas USA chose Connecticut midfielder Carlos Alvarez at No. 2 (as they said they would), and Toronto FC used the third pick on Boston College midfielder Kyle Bekker, a Canadian U-23 international who showed very well at the MLS Combine in Florida before the draft.

The star-crossed TFC, which has never made the MLS playoffs, did pretty well for itself in the draft, with ex-DC United exec Kevin Payne leading the way. The Reds traded two picks to haul in valuable allocation money, and they got two promising young Canadian players in Bekker and the speedy, versatile Emery Welshman, who can play outside back or striker. As a senior at Oregon State, Welshman (who’s Canadian, despite the surname), bagged 10 goals and four assists.

Other notable developments on Draft Day:

• Vancouver worked a deal with Toronto to obtain the No. 4 pick, which they used to select 18-year-old Gambia native Kekuta Manneh, a speedburner with tremendous upside potential, as Hubie Brown would say. Manneh scored 12 goals in 13 appearances for fourth-tier side Austin Aztex last season. The Whitecaps also added Santa Clara striker Erik Hurtado, another speedster, with the fifth pick.

• Seattle landed well-regarded Indiana striker Eriq Zavaleta, unexpectedly available at No. 10. The former Hoosier can also play defender, and the Sounders plan to use him as a center back, in the wake of Jeff Parke’s departure to Philly.

The day before the draft, the Rapids traded midfielder Jeff Larentowicz to Chicago for the 11th pick, allocation money, and a 2013 international slot. Larentowicz is the third prominent Rapids player to depart this offseason, following Conor Casey (Philadelphia) and Omar Cummings (Houston).

• Furman defender Walker Zimmerman, a highly touted US youth international projected as a Top 3 pick by most observers, fell to No. 7, where he was picked up by FC Dallas.

• Mikey Lopez, a defensive midfielder from UNC who was tabbed as a cinch for the Top 10, fell to 14, where he was happily collected by Sporting Kansas City.

One year after losing the NCAA championship on penalties, the Akron Zips returned to the title game and took home the first D-I trophy in school history, downing previously unbeaten Louisville 1-0.

Midfielder Scott Caldwell scored the winning goal in the 79th minute, collecting the rebound of his own shot and driving it into the top of the net over Cardinals keeper Andre Boudreaux.

Louisville nearly equalized several times after Caldwell’s strike, including in the 89th minute, when Aaron Horton’s shot was saved off the line by Akron defender Chad Barson.

Louisville (20-1-3), led by former Akron coach Ken Lolla, was attempting to become the first undefeated champion since Santa Clara in 1989.

On an Akron team that features multiple quality pro prospects, including U.S. Under-20 players Perry Kitchen and Zarek Valentin, Caldwell was an unlikely hero. But it’s a role he’d grown accustomed to during the Zips’ stretch run: Sunday’s winner was his fifth career goal—all of them scored in the past seven games, starting in the Mid-American Conference tournament.

Overall, the game was well played and a decent showcase for college soccer, which, as we touched on in this week’s MLS column (go check it out here), takes its share of criticism in U.S. soccer circles.

Sure, the college game may not be the best breeding ground for future pros, but it’s better than people give it credit for.

If you compared yesterday’s title game with, say, Colchester vs Yeovil Town in England’s League One, well, the college boys may or may not be able to beat their third-division pro counterparts across the pond, but they definitely play a more attractive, skillful brand of soccer.

Beyond that, the college game is growing. Of the millions and millions of youth players in this country, only a relative handful wind up at Bradenton or on the fast-track of an MLS academy team. The rest head for college—an ingrained rite of passage in the U.S.—and they’re producing quality teams in previously undeveloped soccer areas all over the country.

This year’s runner-up, Louisville, is just the most notable example. The Cardinals have a long tradition of basketball glory, yet here they were coming within a couple of missed chances of a national soccer title.

Michigan, which didn’t even have a D-I soccer program until 2000, reached the College Cup this year, narrowly losing to Akron.

No, NCAA soccer is not on par with a pro developmental program, but it’s not a bad alternative for a player who’s not quite ready to go pro at 18—and it’s never been more competitive.

Here is a brief ESPN recap of the game: