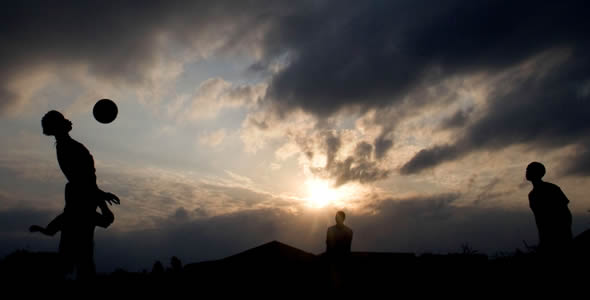 It’s been two days since the end of the World Cup, and if you’re like us, you’re probably feeling like someone took your ball and left the playground. It’s tough, we know. But last night we found the perfect cure for the post-tourney blues: Pelada, a hugely compelling documentary that follows two former college players, Luke Boughen (Notre Dame) and Gwendolyn Oxenham (Duke) on a global pickup-soccer odyssey.

With their pals Rebekah Fergusson and Ryan White behind the cameras, Boughen and Oxenham visited 25 countries in 12 months and came back with extraordinary footage of games with moonshiners from a dire slum in Kenya, inmates in a Bolivian prison, and hijab-swaddled women in Iran.

They play with South African construction workers building World Cup stadiums, with businessmen atop Tokyo skyscrapers, and with Peruvian women in the Andes mountains.

The New York Times likened Pelada to the landmark surfing flick, Endless Summer, and that’s an apt comparison, but it misses something important: While surfing rocks (we could watch Riding Giants all day), soccer is the people’s game—a fact that Pelada drives home like Giovanni van Bronckhorst’s strike against Uruguay in the World Cup semis.

Aided by nothing more than their considerable skills on the ball (they both can play) and their graceful human decency, Boughen and Oxenham gain access to places and people that most travelers and media lenses rarely glimpse. The film is a riveting travelogue all the way through, but it jumps to another plane altogether when the Americans visit some of the more dicey locales.

In addition to the Bolivian prison and the ravaged Kenyan ghetto, they make stops in Jerusalem to join a pickup game between Arabs and Jews—just days after an awful terrorist attack—then follow that up with their government-supervised jaunt to Tehran, where, if Oxenham plays soccer, she will be breaking the law.

You can buy the DVD here, or check out one of the nationwide screenings listed here. Pelada is also available on iTunes.