The Americans got off to a bright start with Cheney’s goal, but France dominated the middle portion of the game—maybe the middle hour of the game—and had several other chances in addition to Sonia Bompastor’s 55th-minute equalizer.

After coach Pia Sundhage brought on Alex Morgan (in the 56th minute) and Megan Rapinoe (64th), the U.S. began to reassert itself. Rapinoe was involved in both second half goals (her pass led to the corner kick that created Wambach’s goal) and was generally instrumental in the win, while Morgan iced it with the third goal in the 82nd minute.

As for Wambach’s winner, nice header and way to get in there and all, but c’mon, that was some terrible goalkeeping. Sacré bleu, Ms. Sapowicz!

Japan and the U.S. have met 25 times before, with the U.S. winning 22 of those games, and the other three ending in draws. So … Japan is due?

The ‘biggest regular-season game in MLS history’ just lost a little—make that a lot—of luster, as Red Bull New York announced today that striker Thierry Henry will not play in Los Angeles on Friday due to an MCL sprain in his right knee suffered on Sept. 4 at Real Salt Lake.

The game, which might have featured a record five designated players (Beckham, Donovan, Rafael Marquez, Juan Pablo Angel, and Henry), is being rightly billed as a blockbuster between two MLS Cup contenders from the league’s biggest markets.

And most important, both teams are in the race for the Supporters’ Shield (best record) and the playoff home-field advantage that confers.

The Red Bulls’ announcement takes some of the shine out of the matchup, but the club for being cautious with its star, not wanting to lose him for the postseason. Here is GM Erik Soler:

“We spoke to Thierry on Monday and we decided that it was the best course of action for his health and for our club to rest him this week. Despite the attention surrounding this Friday’s match, we did not want to exacerbate Thierry’s current injury that he has been playing and practicing with over the past two weeks. We want to ensure that he is healthy for our final matches as we hope to qualify for the playoffs and make a run towards the MLS Cup.”

Understandable, and no doubt the right move for RBNY.

Next Wednesday the Red Bulls will officially announce their second D.P., and we’re 99.9% certain that it will confirm the long-circling rumors and reports of former French national team and Arsenal superstar Thierry Henry coming to MLS.

Look here: they’ve already got his jersey hanging in the locker room at Red Bull Arena.

MLS supporters—the Irish-American wing aside—have to be excited about this one, and Red Bull fans should be licking their chops: The team is in second place in the East, on a four-game unbeaten run, and Juan Pablo Angel has three goals in the past two games.

Add Henry to the mix, and you should—should—have a legit title contender. 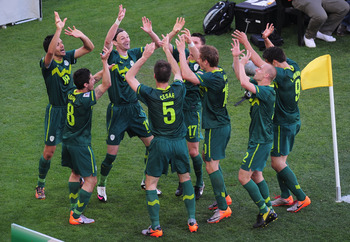 Anyone know what this is all about?

After the World Cup draw last December, the London tabloids claimed England had landed in “the best group since the Beatles.”

Considering the freaky results that have unfolded, though, they may want to change that to the Electric Prunes, or Captain Beefheart. And England is definitely having a strange trip (maybe they took the brown acid).

The Three Lions tied the U.S. on Robert Green’s infamous goalkeeping gaffe, then tied Algeria 0-0 while stars Wayne Rooney and Frank Lampard appeared to sleepwalk for 90 minutes. After that one, they had a pudgy punter wander into their locker-room “looking for the toilet,” he said, before going on tell the team, “You are a disgrace.”

Also falling under the category of weird, if not psychedelic, were Slovenia’s drowsy 1-0 win over Algeria, courtesy of a goalkeeping error almost as bad as Green’s, and the U.S.’s furious rally in its 2-2 draw with the Slovenes—a game marred by a hallucinatory foul call by Malian referee Koman Coulibaly that denied the Americans an unprecedented comeback victory.

Then there are Slovenia’s Charlie Brown uniforms, and their doofus goal celebrations, in which half the roster circles up and twists their hands in the air above their heads as if unscrewing lightbulbs.

What is that, exactly—apart from very dorky and more than a little effeminate? Please advise in the comments if you have information on this deeply goofy ritual.

The strange goings-on were by no means limited to Group C(razy). Over in Group F(’d up), New Zealand tied Italy. No, really. That happened.

It was 1-1, and both goals were dubious—New Zealand’s may have been offside, and Italy’s was a penalty for the briefest of shirt grabs in the box. Put it this way: If that was a penalty, then what the Slovenian defenders did to the U.S. in the box late in last Friday’s game might require a firing squad.

The poor officiating ended up being a wash as—we repeat—Italy, with a pool of 3,541 professional players to call on, tied New Zealand, which has 25.

Speaking of poor refereeing, guess who was the fourth official in the Kiwi-Azzurri tilt?

Apparently, he has since been benched by FIFA, but we swear, he was out there on the touchlines for New Zealand-Italy.

Yesterday, Kaka of Brazil picked up a red card for the tamest of second-yellow offenses: a defensive, light forearm to the chest of Ivory Coast’s Kader Keita, who went down—as if by shotgun blast—clutching his face. But the Ivorians were also on the wrong end of some poor officiating, earlier in the game, when Luis Fabiano appeared to handle the ball, twice, en route to scoring Brazil’s second goal in a 3-1 win.

This morning, North Korea dominated the first 45 minutes against Portugal, only to get blown off the rain-drenched field in the second half, losing 7-0 in the most lopsided game of the tournament, and the biggest World Cup rout since Germany shellacked Saudi Arabia 8-0 in 2002.

All that weirdness, and we haven’t even gotten to France: Is there a French word for ‘meltdown’? When the President steps in to sort things out, you know it’s bad.

This tournament already has an official anthem, Shakira’s “Waka Waka (This Time for Africa),” and that unwieldy title is weird enough, but if this keeps up, they may want to bring in Gnarls Barkley for a rewrite.

The World Cup draw pots were announced today, and, as expected, the U.S. and its CONCACAF brethren were placed with the teams from Asia and Oceania. While it would have been nice to have been grouped with the African teams instead (thereby avoiding drawing them in the first round of the Cup), no one can say they’re surprised it didn’t happen. In fact, the only surprise among the pots was that the Netherlands received one of the eight seeds and nudged France into the pot of second-tier European teams. FIFA swears this had nothing to do with Henry’s handball v. Ireland, but either way, it’s a welcome bit of retribution.

Here are the four pots. On Friday in Cape Town, FIFA officials will pull one team from each to make the eight groups for SA 2010:

The U.S.’ best-case scenario (see previous post) remains unchanged. For the worst-case, we’d plug in either Portugal or France to the spot vacated by the Netherlands.

Now? Not so much…. This has already raged through much of the InterWebs, but we have to include it here at Backpost, simply because it’s an outrage of soccer-historic proportions—one that will never be forgotten in Ireland, and probably not anywhere else (including Red Bull Arena, should Henry deign to make that stadium his new home next summer, as rumors have suggested). Here’s the best version of the evidence out there, and we apologize in advance for the Evanescence:

[Update: the best version was removed from YouTube—no doubt at Sepp Blatter’s orders … kidding!—but the replacement above is not bad, and has no Evanescence on the soundtrack.]

We’ve followed Henry for years, and have always been fans. We watched him play up close and in person at Steve Nash’s charity game on Chrystie Street in New York City, and he always struck us as a class act. But this…this…You know, you think you know someone ….

For those that don’t know: Henry’s little extra-legal improvisation bounced Ireland out of the World Cup finals in South Africa next summer, and sent France to the tournament.

May they go three and out.