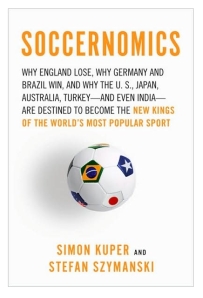 We mentioned this book a few weeks back but it’s well worth another look. Co-written by Simon Kuper (who wrote the equally excellent Soccer Against the Enemy) and the economist Stefan Szymanski, Soccernomics mines relevant data to challenge much of the conventional wisdom that has attached to the game, like a barnacle, over the years. They find that much of it is not very wise at all.

Take the common perception—until recently shared here at Backpost—that England underachieves on the world stage. Using their criteria for international soccer success—population, income-per-capita, and experience in the game—Kuper and Szymanski find that England has actually slightly overachieved relative to its soccer peers in Europe during the last few decades.

Another interesting chapter focuses on the (surprisingly few) club executives who’ve brought a systematic approach to player selection and team management—men such as former Derby and Nottingham Forest managers Peter Taylor and Brian Clough (inspiration for The Damned United), Arsenal’s Arsene Wenger (a trained economist), and Jean Michel Aulas and Bernard Lacombe of Lyon (the former a successful software entrepeneur; the latter an eagle-eye evaluator of talent). These are guys “inclined to trust data rather than received wisdom” and their exceptional results speak for themselves.

This is where the book hews closest to Michael Lewis’s Moneyball, about Oakland A’s exec Billy Beane and his game-changing approach to baseball. It just so happens that the A’s ownership group also owns MLS’s San Jose Earthquakes, and Beane is supposedly developing a system for objectively analyzing soccer players.

Of course, soccer is not nearly as stat-heavy as baseball, and until recently no one was keeping any statistics at all in a number of categories, so the database is relatively thin. But that is changing, and in the process, Billy Beane types will come to the fore in the Beautiful Game. Just don’t tell Joe Morgan.