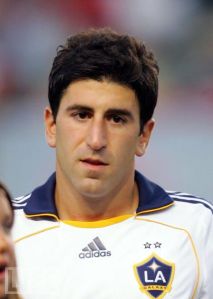 Alecko Eskandarian, the 2004 MLS Cup MVP, is on hiatus from soccer because he has not yet been medically cleared to play following the fourth concussion of his career, suffered last July in a friendly against AC Milan.

Jack Bell of The New York Times has the story, and unfortunately, it doesn’t look good for Eskandarian’s career.

The 27-year-old striker, son of former New York Cosmos star Andranik Eskandarian, has always played well when healthy (he led D.C. in scoring in ’04 with ten goals), but he’s rarely been healthy for an extended period of time.

He suffered his first concussion in his very first MLS game, back in 2003 against Chicago, saying Fire defender Carlos Bocanegra called for Eskandarian to be removed from the game because he was “babbling” and incoherent after hitting his head on the ground following a collision on a corner kick.

Eskandarian, who played for the Los Angeles Galaxy last year, says he may sit out this season and then weigh his options for 2011.