The Professional Footballer’s Association released a six-name list of candidates for it annual player of the year award today, and it looks like this:

Van Persie, Rooney, and Aguero, okay, fine, but in what universe did Parker and Silva have better years than Fulham’s Clint Dempsey? (Or Newcastle’s Demba Ba, for that matter.)

When last we heard from him on the subject, back in early July after the Gold Cup final, U.S. Soccer Federation president Sunil Gulati said a statement regarding USMNT coah Bob Bradley’s future would be forthcoming that week.

Then Gulati fell silent, and the topic receded to the background.

Today, it’s back, front and center, as Gulati and the USSF released a statement saying that Bradley has been “relieved of his duties” as national team coach. Here’s some more from the official release:

“We want to thank Bob Bradley for his service and dedication to U.S. Soccer during the past five years. During his time as the head coach of our Men’s National Team he led the team to a number of accomplishments, but we felt now was the right time for us to make a change. It is always hard to make these decisions, especially when it involves someone we respect as much as Bob. We wish him the best in his future endeavors.”

There is certain to be much more to follow on this, including another announcement from the federation tomorrow.

We couldn’t find this on the you tubes earlier, but we’ve managed to chase it down—the Timbers Army setting the stage for last night’s indelible home opener:

Click here for a great piece by ESPN’s Jeff Carlisle on “Timber Jim” Serrill and the Timbers’ storied past.

There is probably no team with more of a desire to see MLS conform to FIFA’s International Fixture dates than the Red Bulls.

When New York kicks off in Columbus tomorrow afternoon at 4:00 (MSG +/Direct Kick/MatchDay Live) they will be without five starters and a backup keeper due to international call-ups.

Tim Ream and Juan Agudelo will be with the U.S. as it faces Argentina, Rafa Marquez will play for Mexico, Dane Richards will suit up for Jamaica, Roy Miller got called in by Costa Rica, and second-string netminder Bouna Coundoul was tapped by Senegal.

Add the fact that Thierry Henry will miss the game with a hamstring strain (here we go again with that guy), and you are going to see a very … interesting lineup take the field for New York tomorrow afternoon.

We have no idea how they’re going construct a backline in the absence of three defensive regulars (Miller, Ream and Marquez), and with substitute Chris Albright rehabbing from surgery. Teemu Tainio will probably move from midfield to outside back, but coach Hans Backe will have to make multiple other adjustments as well, all over the field.

The other teams hit hardest by call-ups are Sporting Kansas City and Real Salt Lake, both of which had three players tapped for international duty.

The Week 2 schedule kicks off tonight when Seattle welcomes Houston to Qwest Field (Fox Soccer Channel, 10:00 p.m. EST). Both clubs will be looking for their first win of the season after Seattle started with consecutive 1-0 losses to Los Angeles and New York, and Houston was surprised at home by the same scoreline when Danny Califf poked home a rebound for Philadelphia last Saturday.

Following tonight’s tussle in Seattle, there are eight games on Saturday. In addition to the matchups mentioned above we have (home teams listed first):

The Reds face an expansion team for the second straight week to start the season, and, as their 4-2 loss to Vancouver showed last week, that’s probably for the better. Toronto is still working out the kinks as they try to implement new coach Aron Winter‘s system. Portland began its MLS existence with a 3-1 defeat to defending champion Colorado last week, and should welcome the chance to measure themselves against the struggling Reds.

Both teams started the season with a bang last week, the Union upsetting Houston on the road and Whitecaps FC overwhelming Toronto at home. The Sons of Ben will be out in force for the home opener at PPL Park. Philly will want to keep tabs on Vancouver playmaker Davide Chiumiento, whose midfield brilliance was somewhat overshadowed by new DP Eric Hassli‘s two goals last week.

Charlie Davies brings his magic to the Big Razor to face a New England team that narrowly escaped rainy Los Angeles with a 1-1 draw last week—and will play without Kenny Mansally and Sainey Nyassi, both of whom were called to the Gambian national team, this week. CD9 scored two to lead the Black-and-Red to a 3-1 win over Columbus last Saturday.

The Hoops will be without centerback Brek Shea, who was red-carded in last week’s 1-1 tie with Chicago. San Jose hopes to make up for last week’s tough home loss to Real Salt Lake, a game in which they created but failed to convert several good chances.

It doesn’t get any easier for Robin Fraser‘s rebuilt squad: they welcome the defending champs one week after a 3-2 home loss to high-flying Sporting Kansas City. The Rapids will be without international call-ups Sanna Nyassi (Gambia) and Omar Cummings (Jamaica), but they’ll still present a stiff challenge for the Goats.

*Alvarez was born and raised in Houston, Texas, and represented the U.S. at the U-17, U-20 and U-23 levels, but chose to play for his parents’ native El Salvador at the senior level. 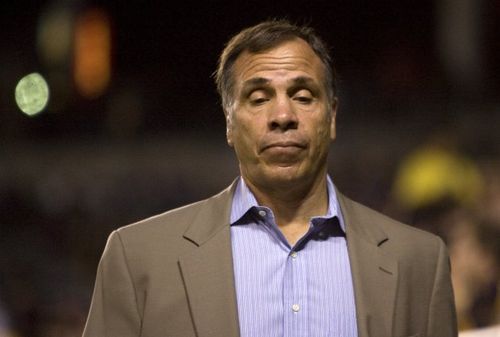 Last Tuesday in Los Angeles, Landon Donovan, Edson Buddle and the rest of the Galaxy were blown off the field by the second-division Puerto Rico Islanders in a CONCACAF Champions League game.

The embarrassing 4-1 loss ranks among the low points in Major League Soccer history: the Galaxy has the best record in the league, boasts two former and two current U.S. World Cup-team players, and a former national-team coach, yet was trounced by a sub-.500 D-2 team in a game that mattered.

MLS teams have underperformed in the history of the CCL tournament, which could be a real boon to the credibility of the league, in the region and the world.

D.C. United won it all in 1998 and the Galaxy took the tournament in 2001, but MLS teams have been shut out of regional Champions League hardware ever since, and they’ve infamously never won a single game in Mexico in this competition.

So yeah, the Galaxy had no reason to take this game lightly.

We’re not saying they did. We’re saying it’s worse than that.

The drubbing to Puerto Rico was the low point (LA fans hope) in a poor post-World Cup run of form by Los Angeles. Sure, they beat Seattle 3-1 in Donovan and Buddle’s adrenalin-fueled first game back from South Africa 2010, but then came a 2-0 loss to New England, a squeaker win over DC, and a last-gasp 2-2 tie against San Jose.

That gave way to the Champions League debacle, and last night, at home, the Galaxy was humbled by Chicago, which ran up a 3-0 lead inside the first 20 minutes before holding on to win 3-2.

The results speak for themselves: all is not well in LA LA Land.

The team’s greatest strength in the first half of the season—defense—is turning into its biggest weakness of late. After conceding just 10 goals in the first 18 games of the year, the LA backline has given up nine in its last three games.

Are centerback Greg Berhalter’s 37 years catching up to him here in the second half of the season? He looked every bit his age against Puerto Rico.

All-Star goalkeeper Donovan Ricketts has been shaky recently as well: he gave up two soft goals to the Fire last night, and conceded three total on four shots.

There’s also the Landon Donovan Situation, which must be a distraction for both the team and the player. He scored two goals last night, but both were from the spot, and he was practically invisible in the first half. Is he pining for a move to Europe, and is the uncertainty affecting the team? We say yes and yes.

Coach Bruce Arena has enough time, and talent on his roster, to get it sorted before the playoffs, but the immediate road ahead is tricky: They have the Champions League return leg in Puerto Rico on Wednesday, a high-profile friendly with Real Madrid on Saturday, and then a sold-out showdown with Thierry Henry, Juan Pablo Angel, Rafael Marquez (it’s official now) and the Red Bulls in New York the Saturday after that.

Don’t be surprised if red-hot Real Salt Lake has overtaken Los Angeles at the top of the West standings by then.

We’re not sure which performance is more stunning, but we’re enjoying re-watching the highlight:

Note that Andrés Iniesta starts the whole thing, then essentially finishes it with the lob to spring Xavi. 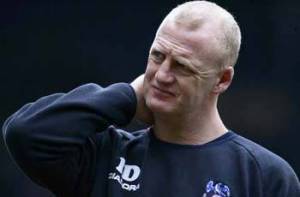 With a deficit in goal difference of -23 to West Ham going into the match, Hull was effectively relegated before today’s meeting with Wigan, but now, it’s official: after a 2-2 draw with the Latics, the Tigers are going down.

Hull gave up a stoppage-time equalizer to Wigan’s Steve Gohouri, and now have no mathematical chance of catching West Ham.

U.S. striker Jozy Altidore was suspsended for the match, and according to some reports, has already been shipped back to Villareal (and fined for his actions last week against Sunderland).

A terrible ending to a mediocre season for Altidore. He scored just two goals in all competitions, and never nailed down a starting spot. On the other hand, the Tigers have been awful over all in 2010, and their forwards starved of decent service. The team has 34 goals this year, the same total as last-place Portsmouth.

Altidore will no doubt be eager to forget this season, get into camp with the U.S. national team, and look for redemption at South Africa 2010. 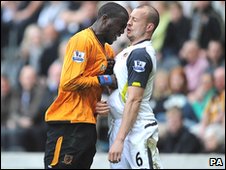 Jozy Altidore was red-carded in first-half stoppage time of Hull City’s game against Sunderland on Saturday. The 20-year-old U.S. striker head-butted Sunderland right back Alan Sutton after Sutton threw the ball at him following a scuffle for possession.

According to Sunderland coach Steve Bruce, the blow left Sutton with a broken nose, a chipped tooth and a cut above his eye. Sutton was also red-carded in the incident.

Needless to say, this was not the way Altidore wanted to go out in the Tigers’ biggest game of the year—they ended up losing 1-0 on a seventh-minute goal by Darren Bent and are now effectively relegated. To stay up, Hull City would need to not only win its last two games while West Ham loses its last two, but also somehow engineer a 23-goal swing in goal differential in the process.

In other words, the Tigers are done in the Premier League.

And after his performance, the on-loan Altidore may be done at Hull. On Sunday, he apologized via twitter; click here for the text.

He no doubt realizes he made a mistake and how much more costly it would have been if Sutton hadn’t also been sent off, but the incident casts doubts on his credentials as the top (healthy) striker in the U.S. national team pool. World Cup opponents will no doubt keep this incident in mind when they face Altidore in South Africa.

Rangers boss Walter Smith continued to play the hot hand yesterday, starting Amerk winger DaMarcus Beasley for the third consecutive game, and getting rewarded yet again as Beas struck for a goal and assisted on another in Rangers’ 3-0 pasting of Dundee United.

Here is the goal, and you can tell it’s a great strike even in this Zapruder-like footage: