Check your calendars, ladies and gentlemen: It’s Feb 12—birthdate of Abraham Lincoln, sure, but more importantly, exactly four months before the U.S. faces England in its World Cup opener in Rustenberg, South Africa.

It’s getting close, people. Look at it this way: Brazil has a friendly against Ireland in roughly two weeks, and that game will be its final tuneup before the World Cup. (Brazil coach Dunga did not call Ronaldinho in for that one, btw, despite the player’s recent fine form for Milan.)

Needless to say, the U.S. is not Brazil; the Nats will probably have—and definitely need—several more exhibitions before the tournament, starting with the match on Feb 24 against El Salvador.

But Brazil? They’re all, “Nope, we’re good—just the one. We’ll be ready to roll.” Then they’ll get the team together a month before the Cup and waltz—or, rather, samba—to the final, with Luis Fabiano scoring nine goals along the way.

But the U.S. is a little different. It doesn’t have anything close to Brazil’s depth, and with the injury difficulties the team is suffering at the moment, it still has a few things to sort out. Let’s get to it:

1. Tim Howard—He should have done better on Dirk Kuyt’s goal in the Merseyside Derby last weekend, but he’s still the clear No. 1.

2. Brad Guzan—Like Howard, Guzan has a knack for stopping penalties. A useful skill in tournaments.

3. Marcus Hahnemann—The Wolves keeper has been conistently good, and occasionally spectacular, this year.

11th-Hour Candidate(s)—Over the strenuous objections of reader M, we humbly suggest … Brad Friedel. We realize he’s retired from international duty, but, man, is he playing well—he might even be a smidgen better than Howard at the moment. In lieu of Friedel’s (unlikely) un-retirement, though, Troy Perkins, who’s back with D.C. United, retains this spot.

1. Steve Cherundolo—He injured his shoulder recently but should be back in action soon, and was in good form before the injury. Experienced, reliable.

2. Jonathan Spector—He holds on to this spot, but…see ‘Left back’ … and ‘Centerbacks’

3. Frank Simek—He played in Sheffield Wednesday’s 2-0 win over Blackpool this past Tuesday, making two fine defensive plays near the end to preserve the shutout.

11th-hour Candidate(s)—Marvell Wynne. He’s in camp with the U.S. right now. Let’s see how he does against El Salvador. After his mediocre showing vs Honduras on Jan 23, he may need a stellar game to stay on the radar. Frankie Hejduk is still a possibility, too.

1. Carlos Bocanegra—After a worrying spell on the bench at Rennes, Bocanegra has won back his starting spot in Ligue 1. Good news for U.S. fans.

2. Jay DeMerit—He’s recovered from his eye injury and is rounding into form with mid-table Championship side Watford, where he is captain.

3. Oguchi Onyewu—Tore his patella last October but is recovering well and expects to resume training with AC Milan by the end of the month.

1. Jonathan Bornstein—Another bright spot vs Honduras, Bornstein is still clinging to the top position here, but….

2. Jonathan Spector—has been getting regular PT at left back for West Ham. He’s definitely crowding Bornstein.

3. Carlos Bocanegra—Could shoot to the top depending on Onyewu’s form and fitness come June.

11th-Hour Candidate(s)—Heath Pearce will be a regular starter with FC Dallas this spring; Edgar Castillo remains an intriguing possibility, but has yet to play here for the U.S.

1. Landon Donovan—Clint Dempsey’s injury and Donovan’s excellent play at this position for Everton have combined to move LD into the top spot.

2. Stuart Holden—On the verge of his Bolton debut after a few weeks out with a thigh strain. Bob Bradley and U.S. fans will be watching.

1. Michael Bradley—Continuing to start and play well for Borussia Moenchengladbach.

2. Benny Feilhaber—Moves up to No. 2 because he’s healthy and has been getting games all season, unlike the guys below him here.

3. Maurice Edu—He’s on Rangers’ match-day squad for this Sunday’s game against Hibernian. If he stays healthy throughout the spring, he could be a very useful player for the U.S. in South Africa.

11th-Hour Candidate(s)—Torres plays here with Pachuca, but does he have enough defensive bite for Bradley to trust him? As for other candidates, well, at this point, we are ruling out Keyser Soze Jermaine Jones.

1. Landon Donovan—As great as he’s been at Everton, he can’t play two positions at once. But he really is the first choice at either wing spot—and in the middle if Bradley opts for a five-man midfield at any point. The status of other players and the tactical approach Bradley wants will determine where LD lines up.

2. DaMarcus Beasley—Beasley was playing very well for Rangers before injuring his thigh a few weeks ago. He’s back in the squad for Sunday’s game vs Hibernian, and we wouldn’t be at all surprised if he picked up where he left off.

3. Jose Francisco Torres—If he gets healthy, and gets a clear shot at it, you have to think the skillful Torres can help the U.S. midfield, somewhere.

11th-Hour Candidate(s): Robbie Rogers. With a good start for Columbus this spring, he could play his way into a World Cup spot. Alejandro Bedoya is also a candidate in this category, along with Freddy Adu, who looks like he’ll be seeing more of the field with his new club Aris than he has in recent seasons.

1. Jozy Altidore—A string of good performances at Hull City keep him in the top spot here.

2. Conor Casey—He looked capable as a target forward vs Honduras, and, hey, the forward ranks are thin right now.

3. Robbie Findley—Had some flashes in the Honduras friendly, and as you may have heard, you can’t teach speed.

4. Brian Ching—The Dynamo target man is currently in camp with the U.S. ahead of their Feb 24 friendly with El Salvador.

11th-Hour Candidate(s): Charlie Davies! Ya gotta believe. No diggety, no doubt, says one of his biggest fans, reader CC. Both Donovan and Dempsey can also play up top if needed. We don’t see Jeff Cunningham making the team; he was ineffective in last month’s friendly. And Eddie Johnson will need to start a goal-scoring run at Aris to work his way into the picture.

That’s how it looks to us, four months out. What do you think? Did we miss anyone? Are we jumping the gun on Beasley (and Edu)? Let us know in the comments. 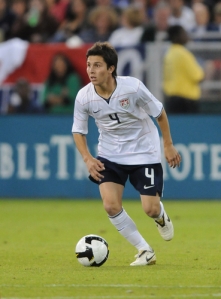 Where does Torres stand?

Tomorrow will mark exactly six months until the U.S. meets England in its 2010 World Cup opener in Rustenberg. Which Yanks will be suited up for the historic game against the Motherland? Needless to say, a lot can change between now and then, but here’s what the U.S. depth chart looks like to us right now, with comments and a potential late-blooming candidate for each position:

2. Brad Guzan—Has shown poise and ability every time he’s been called upon by club and country.

3. Marcus Hahnemann—About to get his third straight start for Wolves.

11th-hour candidate—If one of the above picks up an injury, Troy Perkins.

1. Steve Cherundolo—He’s rounding into form, and his experience gives him a slight edge for the top spot here.

2. Jonathan Spector—Athletic, calm on the ball, and swings in a decent cross. (Can also play centerback.)

3. Frank Simek—He’s healthy again and starting for Sheffield Wednesday in the Championship. Good signs for his chances.

4. Frankie Hejduk— Hejduk looked horrendous in the November friendlies, but he’s a good bet to bounce back, and he’s a good locker-room guy, with plenty of experience. Could rise on this chart.

11th-hour candidate—It’s difficult to imagine him going to South Africa, but Marvell Wynne is an astounding athlete with a freakish ability to recover when beaten.

1. Carlos Bocanegra—Injuries to Onyewu and DeMerit have put him at the top.

2. Jay DeMerit—He’s back to fitness and will get his first start of the season with Watford tomorrow.

3. Jonathan Spector—Looked comfortable in this spot in the November friendlies. Edges Chad Marshall due to his versatility.

4. Oguchi Onyewu—With a bullet. If his torn patella mends in time for him to reach match fitness, he goes straight to the top. (And Bocanegra becomes a left back, in our view.)

11th-hour candidate(s)—There are a number of guys waiting in the wings, including Chad Marshall, Clarence Goodson, Jimmy Conrad and potential darkhorse Geoff Cameron.

1. Jonathan Bornstein—Sigh. Nothing against Bornstein, but he is not quite a finished-product, ready-to-start-against-England left back yet. But he’ll do until someone better comes along.

2. Carlos Bocanegra—Moves to the top of the list if Onyewu recovers, and Bradley can start the backline that played against Spain in the Confed Cup last summer.

3. Heath Pearce—We almost put a question mark next to his name—that’s how thin the U.S. is at left back.

11th-hour candidate—Jonathan Spector. He’s played LB at West Ham. We might prefer him over Heath Pearce, even if he’s not naturally left-footed.

1. Clint Dempsey—Unless Bradley decides to play him up top, this spot is his.

2. Stuart Holden—Not out of the question that he would start, in above scenario.

3. Robbie Rogers—His speed and versatility (he can play on the left, too) give him the nod here. Big year coming up for Rogers.

4. Sacha Kljestan—Was in the mix as a potential starter not too long ago.

11th-hour candidate—Jose Torres (if he ever gets a clear chance to show what he can do).

1. Michael Bradley—He’s won back his spot at Moenchengladbach, and he’s a box-to-box guy.

2. Ricardo Clark—Coach Bradley chose the Bradley-Clark pairing most often in 2009.

3. Benny Feilhaber—Had a good summer; poised and skilled on the ball.

4. Maurice Edu—Recently started training with Rangers after months on the shelf. Set to rise here.

11th-hour candidate—Jermain Jones has had yet another injury setback, but if he can get healthy in time for Bradley to bring him in to a camp, many observers swear he’s a lock for the team. We’ll see.

1. Landon Donovan—He can play on the right as well, or as a withdrawn forward. One thing is certain: he’ll be on the field if he’s healthy.

3. Robbie Rogers—As we said, can play on both sides, though he’s a natural lefty.

4. DaMarcus Beasley—Don’t count him out. He’s battling to get back into the first team at Rangers.

1. Jozy Altidore—He’s starting regularly at Hull, and is such a handful for defenders that he has to be out there.

2. Brian Ching—Strikes us as more dynamic than Conor Casey. Best target forward we have at the moment.

3. Conor Casey—Came up huge in Honduras, but can he do it Rustenberg?

4. Robbie Findley—His raw speed would trouble any defender, but he’s inexperienced at the international level.

11th-hour candidate—He recently vowed that he’d be healthy in time, and if so, Charlie Davies would probably make the trip, even if he was a little rusty. It would certainly be inspiring for team morale. Landon Donovan and Clint Dempsey can also both play up top.

So there you have it. Did we miss anybody? Do you disagree with our rankings? Let us know in the comments.