This is the “back-and-to-the-left” moment of the U.S.-Slovenia game, which should have sent the Yanks to the top of Group C (for Crazy):

Check it out, courtesy of Soccer By Ives commenter “Zac”: 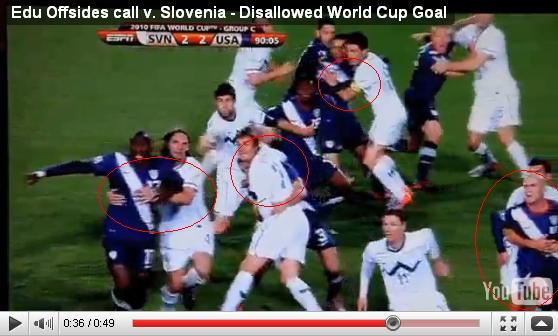 Zac has circled only four Americans being grappled by Slovene defenders, but there are actually five, if you notice Jay DeMerit being shoulder-tackled on the far side of the shot. Michael Bradley, in the lower right corner, is being wrapped up WWE-style.

And what about Maurice Edu, the goal-scorer and the player, apparently, who was whistled for the foul? He’s number 19 in the center of the shot, bursting through to score—as a Slovenian player attempts to foul him.

Koman Coulibaly’s name goes down next to Hugh Dallas’s on the growing list of  refs who have jobbed the U.S. at the World Cup.

But, onward and upward—after England’s surprising (and surprisingly listless) 0-0 draw with Algeria, the U.S. controls its destiny: beat the Algerians next Wednesday and advance.