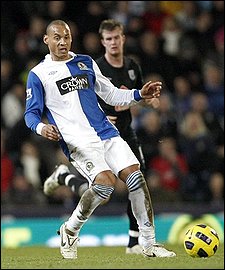 It was a big weekend for Americans in the Premier League as Clint Dempsey scored both goals in Fulham’s 2-0 win over Stoke City, Jonathan Spector buried one in West Ham’s 2-2 draw with Everton, and new U.S. national teamer Jermaine Jones went the distance and was named Man of the Match in his debut for Blackburn, which downed West Brom 2-0.

Jones is on loan from German side Schalke 04, and his first performance in England drew praise from Blackburn manager Steve Kean, who said of his new signee, “He’s not even fully fit, but he’s got everything.”

Dempsey’s goals were his team-leading eighth and ninth of the season. They pulled the Cottagers further out of the relegation zone, and got us wondering—as rumors of Deuce transferring to Liverpool resurfaced this week—how productive Dempsey might be if he played for a “big four” team. We may find out before he’s done over there.

Erstwhile defender Spector continued to shine in a midfield role, scoring his fourth goal in all competitions from that spot this season. He beat U.S. teammate Tim Howard with a side footed shot into the roof of the net to give the last-place Hammers a 1-0 lead in the 27th minute.

West Ham held a 2-1 lead into injury time and were on the verge of a desperately needed three points—until Everton midfielder Marouane Fellaini found a late equalizer.

At Villa Park on Saturday, U.S. keeper Brad Friedel, who is facing bankruptcy after investing millions in a soccer academy in his native Ohio, put aside his personal woes to make several key saves and preserve Aston Villa’s huge 1-0 win over third-place Manchester City.

Friedel backstopped Villa to another win today—a 2-1 victory at Wigan that put more distance between the Villans and the drop zone.

Yesterday at the Reebok Stadium, U.S. midfielder Stuart Holden and Bolton fell to Chelsea 4-0. Holden started and played 87 minutes. Bolton has tumbled to 10th in the standings after their bright start, having claimed just eight points from their last 10 games.