We’ve previously written about the Dubious Goals Panel, which despite sounding like something from Monty Python’s Flying Circus, is an actual committee that “discusses goals which need to be reviewed in the English Premier League.”

The ruling body—which is composed of former referees, players, and managers who have performed at the highest level—convenes on an as-needed basis, “whenever there have been a number of dubious goals,” to decide who should get credit for the tallies.

We say it’s time for another ad-hoc meeting to give the strike below—which was ruled an own goal—to its proper owner, Fulham and U.S. attacker Clint Dempsey:

A few years back, a Premier League spokesman gave the following explanation for the Panel’s guidelines regarding own goals:

“As a rule, if the initial attempt is goalbound, it is credited to the player making the goal attempt. However if the deflection means that a wayward effort results in a goal then it is attributed to the player who had the last definitive touch of the ball.”

This explanation, as well as FIFA’s (more on that in a second), leaves a fair amount of gray area.

Dempsey’s attempt is certainly not wayward, but is it goalbound? Well, it’s goalpost bound (if we can call the crossbar that for a second), and then the deflection hits Stoke keeper Thomas Sorensen and goes in.

Would it have gone in without the deflection off Sorensen? Looks like a ‘no’ on that. But you could also argue that Sorensen’s touch is hardly “definitive.” He was the last one to know about it. And then there’s this from a 2006 FIFA fact sheet:

“Shots that are on target (i.e. goal-bound) and touch a defender or rebound from the goal frame and bounce off a defender or goalkeeper are not considered as own goals.”

You’d think that would settle the matter in Dempsey’s favor (and give him his 17th goal of the season across all competitions) but the following counter-argument is apparently what led to the own-goal ruling (per Brian Straus at Sporting News):

“Because the ball was headed away from the net when it hit the goalkeeper, Dempsey wasn’t given credit for the strike.”

This is why we need the loftier minds of the Dubious Goals Panel. We look forward to their ruling.

[If clip above goes dark, see here for goal replay.] 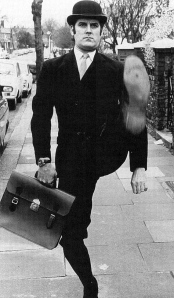 A tipster points us to this odd bulletin from something called the Dubious Goals Panel. No, really. This in an actual panel, or committee, convened by the Barclays Premier League, apparently to ensure that goals—deflected ones, in-the-mixer tallies, own goals etc.—are credited to their proper source for the official record.

At least that’s our understanding of it. Who knew there were so many ‘dubious goals’ in soccer? The report covers 19 of them in two months of Premier League action. And here we thought it was a simple game.

But that name—’Dubious Goals Panel.’ A friend of the site points out it’s a bit “Ministry of Silly Walks.” Yes, or maybe it was a byproduct of the sessions that created this one:

“Aristotle very much the man in form.”

Sure, but would he be the best qualified to determine the certainty of a given goal? Not for us to say, but you wouldn’t want George “Matter Does Not Exist” Berkeley for the job, that much we can tell you*.