It’d be hard to argue against it, though Clint Dempsey is not done yet over there.

They love them some Brian McBride at Fulham.

U.S. attacker Clint Dempsey buried the rebound of a Danny Murphy shot in the 85th minute against Liverpool last night, lifting Fulham to a 1-0 win over the Reds, and pushing Dempsey’s Premier League career goals total to 37, the most by an American in the history of the league. Brian McBride, Dempsey’s former teammate at Fulham, retired with 36.

You have to love Deuce’s anticipation on the play. As Prison Mike said, “Ninety-nine percent of the players in the EPL would not have crashed the net on that shot.”

The goal also provided a kind of full-circle moment for Dempsey. He scored his first Premier League goal against Liverpool (on May 5, 2007), and it also gave Fulham a 1-0 win. But not just any 1-0 win: This one was a whopper as it saved Fulham from relegation that season.

Monday’s goal was Dempsey’s fourth of the season, and it moved Fulham from 17th to 13th in the Premier League.

U.S. attacker Clint Dempsey scored the first goal in Fulham’s 2-0 win over Wigan this past weekend, giving him 36 career goals in the Premiership, a total that ties former Cottager Brian McBride for the most goals by an American in EPL history.

See the historic play here, courtesy of The Denim Kit:

Before Deuce is done, they’ll have two pubs named for Yanks at Craven Cottage. 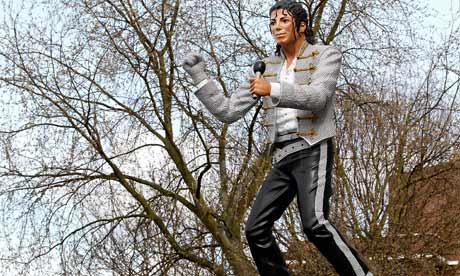 Question: What do Brian McBride and the late pop star Michael Jackson have in common?

Answer: Apart from Midwest upbringings, being legends in their chosen fields, and having their faces rearranged throughout their careers (albeit under vastly different circumstances), um, nothing?

Wrong. As of Saturday, both McBride and Jackson have been commemorated outside Fulham’s Craven Cottage stadium.

That’s because Fulham owner Mohamed Al Fayed somehow got it into his head to erect a statue of the deceased American pop singer at his team’s stadium, where there is also a sports bar named in McBride’s honor.

The hilariously awkward monument (above) was unveiled on Saturday, to a chorus of disbelief among the Fulham faithful, all of whom had the same question that occurs to everyone who hears about the development: Why?

Well, Fayed was a close friend of Jackson’s, and he’d originally planned to mount the statue outside Harrod’s department store, a former property of his. When Fayed sold the luxury retailer (to the Qatari royal family, for 1.5 billion pounds), he settled on … Craven Cottage as the site for his King of Pop tribute, even though Jackson has absolutely no connection to the club (he did attend a game there once as Fayed’s guest).

As one supporter says in this video of the unveiling (which features priceless footage of Fayed dancing), “He’s put $160 million into the club,” so he can do whatever he wants with the stadium.

Fayed was less diplomatic, saying that any “stupid” fans who don’t understand the gesture can “go to hell.”

There you have it. Check back in ten years or so when American Clint Dempsey—Fulham’s current leading scorer who helped the club to a 3-0 win over Blackpool on Saturday—gets his Craven Cottage tribute, to make it a trifecta of Yanks on display outside the stadium. 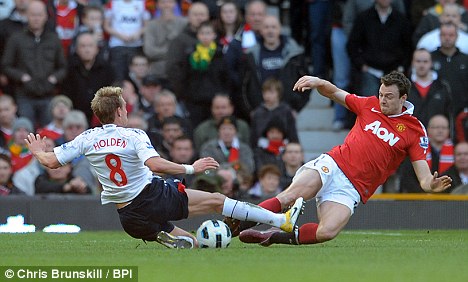 You may have seen the clip of the studs-up challenge from Manchester United defender Jonny Evans that gashed Stuart Holden’s knee on Saturday. (See it here.) The play sent Holden to the hospital for 26 stitches and will sideline the American midfielder for up to six months.

To us it seemed like Evans came in a little too hard and with his studs up, but Holden also crashed into the 50-50 tackle. It was a case of neither player wanting look like he was ducking out of anything, and unfortunately, Holden is going to miss the rest of the Premier League season—which includes an FA Cup semifinal for Bolton—along with this summer’s Gold Cup, because of it. Holden was scheduled to depart today to join the U.S. national team ahead of its March 26 friendly against Argentina.

One name that hasn’t been much mentioned in this is that of Holden’s Bolton teammate Lee Chung-Yong, an excellent player whose overly weighted pass led Holden into the clattering challenge with Evans. We had a coach who called passes like that ‘hospital balls.’ Lee’s was a textbook example.

In better news, U.S. attacker Clint Dempsey set a record for most goals in a Premier League season by an American when he scored his 10th of the year in a 2-1 loss to Everton on Saturday, zipping one past U.S teammate Tim Howard in the Everton goal (click here for highlight).

The loss keeps Villa in the thick of the extremely crowded relegation fight with 33 points. Wigan sits in last place with 30, and there are currently eight teams with 33 points or fewer, with eight games to play.

U.S. defender/midfielder Jonathan Spector did not dress for West Ham’s 0-0 draw with Tottenahm at White Hart Lane on Saturday.

The quote of the week comes from ever-reliable Wolves manager Mick McCarthy, after his team’s win at Aston Villa, in which the home manager Gerard Houllier heard it from the crowd:

“You didn’t have to be the brightest light on the Christmas tree to recognize there was some tension amongst the crowd. I don’t like to hear any manager get hostility towards them but I would prefer it to be him or 18 other managers rather than me! It comes with the job.”

We’re a little late to this but wanted to make note: First it was Red Bull defensive warhorse Mike Petke, then U.S. soccer icon Brian McBride, and on Tuesday, longtime New York holding midfielder Seth Stammler announced that he, too, would hang up his boots after the season. (Beloved MetroBull striker Johnny Wolyniec announced his retirement, also, but he’d already been waived by New York.)

Obvioulsy, it’s the player’s call, but we wonder: Doesn’t this take a little steam out of the season, especially when all three players are (or potentially are, in Petke’s case) key parts of their teams’ playoff pushes?

Isn’t it a potential distraction/motivation dampener?

Seems to us that after the season is a more optimal time for these announcements, but in any case, yeah, those three stalwarts will be calling it a career come late October.

• Petke, who played college ball at Southern Connecticut State, did two tours with MLS’s New York franchise, and is the club’s alltime leader in minutes played, as well as a member of its alltime Best XI. He also suited up for DC United (with whom he won an MLS Cup in 2004) and Colorado in his 13-year career. He earned two caps for the U.S. national team.

• University of Maryland grad Stammler, who will turn 29 at the end of September, decided to retire to attend graduate school at the University of Chicago. He joined New York in 2004, and is second on the club’s alltime list for games started. He has scored seven goals in his career, most of which has been spent as a tenacious holding midfielder. He earned four caps with the U.S. U-23 team in 2003 and ’04.

• McBride was the No. 1 overall pick of the MLS Inaugural Draft back in 1996, going to Columbus. He starred at St. Louis University before joining the A-League’s Milwaukee Rampage (for whom he scored 17 goals in 18 appearances), and then doing a stint in Germany with Wolfsburg.

He was an immediate success in Columbus, and finished his eight-year career there with 62 goals and 45 assists in 161 games.

In 2000, he launched a career in Europe, first with Preston North End, then Everton and Fulham, where he became captain and a legend among Cottagers fans, scoring 40 goals in 153 appearances, and being named Player of the Year in both 2005 and ’06.

In 2009, Fulham announced that the sports bar at Craven Cottage would be renamed “McBride’s.”

His career with the U.S. national team is the stuff of legend as well. He hit the net 30 times in 96 appearances, including two huge World Cup goals against Portugal and Mexico in 2002. He was the first U.S. player ever to score in two World Cups (1998 and 2002). Clint Dempsey and Landon Donovan have since joined him in this exclusive club, but the U.S. has yet to find a target forward with qualities comparable to those of McBride, who retired from international play after the 2006 World Cup.

He was also a tough hombre, as the following highlight reels illustrate:

Landon Donovan’s loan to Everton is official, and will make him the fourth American to play for the club, following Joe-Max Moore, Brian McBride and current goalkeeper Tim Howard.

How will he stack up? Let’s check the record: 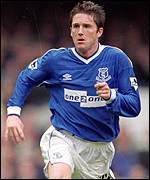 Tulsa Roughneck: the Oklahoman was the first Yank at Everton.

Joe-Max Moore is perhaps not as well remembered as he should be among U.S.  fans: He scored 24 goals in 100 appearances for the national team, including the winner in a 1-0 upset of Argentina in 1999. For Everton, he got off to a cracking start, bagging a goal in five straight games at one stretch, and finishing his debut season with eight.

Highlight: An injury-time equalizer against Tottenham in January 2000 in his second full game with the club.

Fan Favorite? The site “ToffeeWeb.com” refers to him as a “nippy little Yank”—is that a backhanded compliment, or a direct insult?—with an excellent attitude and impressive work rate.

Brian McBride lived a charmed life in England, whether he was suiting up for Preston, Everton, or Fulham. Much like Moore, he got off to a white-hot start at Everton, scoring four goals in his first five games. But he was only with the Toffees on a two-month loan, which was not renewed.

Highlight: Goal against Spurs in the first ten minutes of his debut.

Fan Favorite? An Everton chat-room denizen gives him an ‘8’ out of 10, and Toffee supporters are well aware of what he went on to do at Fulham, where the Cottagers have named a pub after him. He’s one that got away.

New Jersey native Tim Howard is in his fourth season with Everton and already on the path to legendary status. He set the club record for clean sheets last year (16), and has racked up six of them this year. On Dec 6 he saved a stoppage-time penalty from Tottenham’s Jermain Defoe to preserve a 2-2 tie for the Toffees.

Highlight: In April 2009, saved two penalties during FA Cup semifinal shootout against his former team, Manchester United, sending the Toffees to the final vs Chelsea.

Fan Favorite? Most already rate him the club’s No. 2 keeper all-time, behind Neville Southall.

Donovan could suit up for Everton against Arsenal on January 9.

Many observers have suggested that the Premier League is too rugged for a relatively small (5’ 8”) player like Landon Donovan, but that wasn’t a problem for Moore, and Donovan is much faster and more athletic than Joe-Max ever was. He’s also hungry to finally prove himself abroad, and if the pressure that goes along with that (it’s his fourth stint over there, after all), or fatigue, don’t prove too much for him, there’s no reason he can’t shine for the Toffees.