The Premier League tossed up handful of surprises in Week 6, a few of them involving Americans, and all of them adding welcome twists to the early stages of the season.

First up—stop press! West Ham got its first win of the year!

And it came not against a Wigan or a Wolves, but against Champions League entrants Tottenham. Frenchman Frederic Piquionne netted the game’s only goal, on a header in the 29th minute.

That gives U.S. defender Jonathan Spector’s team a win and a tie in its last two games after it started the season with four straight losses. Should you read anything into the fact that Spector has not dressed for either one of those games?

Stuart Holden and Bolton played host to mighty Manchester United, with the U.S. winger getting the start and going the full 90. Bolton came out like a team serious about winning the game; they were full of energy, and they got a fifth-minute goal from Zat Knight.

After Nani tied it up 17 minutes later, the hosts took the lead again, on a rocket from Martin Petrov in the 67th minute. They couldnt hang on, though, as Michael Owen found a 74th minute equalizer. But Wanderers will definitely take the 2-2 tie.

And Holden has definitely nailed down a starting spot in the center of Bolton’s midfield, begging a question for reader Prison Mike: “So why couldn’t he get on the field in South Africa?! Tell me that. Why?!”

It’s a fair question, Mike. The best answer we’ve heard comes from Ref Baiter: “He may not have been 100% match fit back then, after the broken leg in March.”

Howard made two saves—one of them an excellent parry of a shot by Dempsey—and the game ended in a 0-0 draw. Johnson played 35 minutes, and got good reviews from his coach, Mark Hughes.

Everton is off to another atrocious start, having just lost to Brentford (of third-tier League One) in the Carling Cup and still in search of it first Premier League victory. The Toffees are currently dead last in the standings, but we wouldn’t bet on them to stay there.

Hahnemann and Friedel each made six saves—several of the spectacular variety—in the Wolves-Villa match, but Hahnemann couldn’t keep out Emile Heskey’s 87th-minute header, which proved to be the difference in Villa’s 2-1 victory.

The Rest of the Big Four

Liverpool’s debt-ridden American owners could not have been happy with the Reds’ result on Saturday, a 2-2 draw with Sunderland, at Anfield—and one they had to come from behind to earn.

First-place Chelsea was upended by a 59th-minute goal from Man City’s Carlos Tevez that handed the Blues their first loss of the year, and Arsenal was stunned at home by West Bromwich Albion. The promotion side jumped out to a 3-0 lead and held on for a 3-2 win as Samir Nasri pulled two back in the late stages.

Blackpool overcame an own goal to snatch what it thought was a late point on Matt Phillips’s 87th-minute strike at Bloomfield Road, butBlackburn’s Brett Emerton struck back in stoppage time to give the visitors a 2-1 win.

Birmingham City tied Wigan 0-0 but extended its home unbeaten streak to a club-record 18 games, and Stoke City edged Newcastle 2-1 on an 84th-minute own goal by James Perch at St. James’ Park.

Quote of the Week:

Mick McCarthy and Ian Holloway were beaten out by West Ham manager Avram Grant, who had this to say about Robert Green, after the keeper best known for his gaffe against the U.S in South Africa made a number of great saves in West Ham’s shutout win over Tottenham:

“Robert Green is a good goalkeeper and it was a normal performance from him. It was a great save against Modric. It does not matter what is in the papers—he showed on the pitch that he is a very good goalkeeper. His performance today was the best speech.” 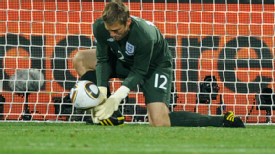 Backpost goalkeeping consultant the Colorado Keeper offered a succinct analysis of Robert Green’s incredible howler versus the U.S. on Saturday.

Forget the Jabulani ball’s Wakefield-esque flight patterns—this was all about technique.

Here is the CO Keeper’s take; compare it with the photo above:

“He violated three Cardinal rules that I preach to kids as young as eight years old.

“Check out the angle of his shoulders—not squared at all.

“Look at his hands—crossed, so he lost a ton of surface area.

“Finally, notice his left knee: I tell all my kids that the moment they put that knee to the ground, they’ve stopped being an athlete.

“I never knew what they then became. Now I do: an English-tabloid whipping boy.”

So, does Fabio Capello start Green in England’s next game? Share your thoughts on that question, and the Green analysis, in the comments.