On a patchy field in Panama City, the U.S. U-17 national team got a 49th-minute goal from midfielder Corey Baird and made it stand up for a 1-0 win over Guatemala in the Americans’ second game of the CONCACAF U-17 Championships.

Check out the highlights, which include some quality wing play from Rubio Rubin, and a sweet piece of skill (at the 1:56 mark) by newcomer Joel Sonora, a Boca Juniors Academy product who made his first start for the U.S. U-17s:

The victory handed the Group C title to the U.S., who defeated Haiti 3-0 in their opener on April 7 behind two goals from Red Bulls Academy player Christopher Lema.

The Yanks now move on to face Group D runner-up Honduras on Sunday (6:00 pm ET, Fox Soccer) with a berth in this fall’s U-17 World Cup on the line.

If the Americans win, they’ll advance the CONCACAF semifinals as well as to the nation’s 15th consecutive U-17 World Cup, with this year’s edition being held in the United Arab Emirates from October 18 to November 8. 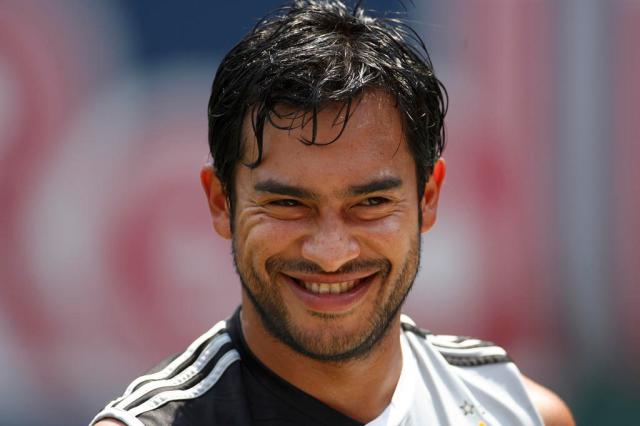 Guatemalan striker Carlos Ruiz, who qualifies as one of the Top 5 villains in MLS history for his dive-y, cheap-shotting, continuously complaining style of play, is back in the league again for the first time since 2011.

DC United acquired the scrappy forward through the league’s allocation process—an acquisition mechanism for former MLSers who left for a transfer fee or U.S. internationals.

Apparently—and somewhat surprisingly given Ruiz’s MLS strike rate—multiple teams ahead of DC in the allocation order passed on the player.

Sure, Ruiz sometimes provokes opponents into rages in which they are prone to doing things like this*:

But he is a proven goalscorer who, at 33, probably has a good season or two left. It’s surprising that a bunch of teams would pass on him. In 2002, Ruiz scored 24 goals for LA and won the regular-season and MLS Cup MVP awards, leading the Galaxy to their first MLS championship. He is ninth all time on the MLS goalscoring list and during his last spell in the league, in 2011 with Philadelphia, he bagged six goals in 14 appearances before jumping to Mexican side Veracruz.

He also has an impressive 54 goals in 104 international appearances for Guatemala.

Should be interesting to see how he and his sometimes devious ways fit in with DC and their straight-shooting coach, Ben Olsen.

*We in no way condone Clark’s outrageous behavior in the above clip, but two thoughts on the incident: One, it’s the only time Clark has ever done something even remotely like that in his career, and we’d be willing to wager Ruiz did something fairly objectionable to provoke it. Two, notice how Ruiz grabs his head and starts rolling around in apparent agony—after the blow clearly struck him in the shoulder. El Pescadito, he’s a slippery one.

These clips always provide an interesting perspective, and in this case, they actually shed new light on the game: As friend of BP Prison Mike pointed out, you can see that Clint Dempsey wasn’t just being safe when he punched in Michael Bradley’s chip for the third goal. The ball was probably heading wide; Deuce made sure it found the back of the net.

Check it out (third replay of the goal shows it best):

A couple of other thoughts:

• Steve Cherundolo’s ball that sprung Eddie Johnson for the second goal looks even better from this angle than it did on the TV broadcast, and that’s saying something.

• The U.S. really should have added a couple more goals. EJ had a good chance or two, and Herculez Gomez bothched two opportunities.

• You can see that after the third goal Dempsey tells Bradley that it was his goal, to which the midfielder replies, if our lip-reading skills are on point, “No way. That was your f****** goal.” He’s got a point, too, and not just because the ball may have been going wide. Dempsey has a great habit of crashing the goal when shots are taken. That instinct got him a lot of goals at Fulham, and it got him that one. While not one but two Guatemalan defenders stood and watched, he charged in and finished the play.

Better a day late than never (we were on the road yesterday): Below are the highlights from Tuesday night’s tilt at Livestrong Sporting Park, in which the U.S. gave up a shocking early goal to ex-MLSer Carlos Ruiz, then stormed back for a fairly convincing 3-1 win that sent them through to the final round of CONCACAF qualifying and eliminated Guatemala.

Clint Dempsey set up the first goal and scored the other two. Michael Bradley provided solid midfield anchorage, got forward effectively, and proved that he’s the most important U.S. player at the moment. Eddie Johnson was consistently dangerous, and assisted on the second goal.

1. Jurgen Klinsmann’s goal celebrations were a tad much. Was it really that much of a relief, coach? Didn’t you expect to win? That said, we recall him celebrating almost the exact same way after Germany’s goals against Costa Rica in the opening game of the 2006 World Cup. So maybe it’s just his thing.

2. This Guatemala team was missing as many players as the U.S. was, and their replacements weren’t as good as Klinsmann’s backups. They started a 20-year-old in central defense, next to a player who plays in Guatemala’s second division, and they also trotted out two players currently without a club. So while the U.S. win was fairly solid, the competition was a step down from what it’ll be in the next round, and they never should have had any of the shaky moments they did.

3. Speaking of that next round, it’s probably the toughest Hexagonal since the U.S. started reaching the World Cup regularly in 1990. Mexico has never been better, and Honduras is loaded with talent, including some of the players who helped beat Spain in the London Olympics. Los Catrachos humiliated Canada 8-1 on Tuesday. The Canucks only needed a tie in that game to advance, and they did not come within a continent’s distance of getting one.

Panama is vastly improved, and filled with athletic, dangerous players, while Costa Rica is always competitive, featuring Real Salt Lake’s leading scorer Alvaro Saborio, and Fulham man Bryan Ruiz. Jamaica is the weakest team of the six, and they beat the U.S. 2-1 last month in Kingston.

Klinsmann’s team will have to sort themselves out before that round, which begins in February (according to U.S. Soccer).

The coach will have to infuse the team with new blood, too, the sooner the better. More on that in the next post.

In 15 months on the job, U.S. coach Jurgen Klinsmann has displayed an almost annoyingly sunny disposition, always quick with a smile, a laugh, and an everything’s-going-to-be-fine-trust-me attitude, no matter the circumstances.

That all changed today. Today, Klinsmann broke out his game face:

We say the U.S. could’ve benefitted from that demeanor last month, before they lost to Jamaica in Kingston, or last June, before they coughed up a 1-0 lead in Guatemala and tied 1-1. But hey, better late than never.

It’s just hours before the U.S. takes on Guatemala in Kansas City with advancement to the CONCACAF Hexagonal on the line, and we’re happy to see Klinsmann drop the warm-and-fuzzy act, but we’re not sure why he’s allowed his roster of outfield players to dwindle to 16 without calling in any reinforcements.

Midfielder Jermaine Jones, suspended for yellow card accumulation, was the latest, and fifth, departure from this particular camp, and still Klinsmann has held pat, calling what’s left of his group “strong enough” to get the job done.

They only need a draw, but psychologically—for fans, coach and players alike—they need to produce a quality performance and a convincing victory to show that Project Jurgen is still on track and headed in the right direction.

Here’s a little nugget from Elias to sooth the nerves of any anxious U.S. fans: In their last 18 meetings with Guatemala, the Americans are 12-0-6 and have only trailed Los Chapines for a total of five minutes.

So, again, they should be able to get the job done. Who will Klinsmann call on to make it happen? Here’s one possible lineup:

We were tempted to slot Sacha Kljestan in at left mid and move Dempsey up top, but Klinsmann trusts Gomez more than Kljestan, and even though he had a stinker in Antigua, Gomez is good in the air—which should be an asset tonight—and works tirelessly on both sides of the ball.

Depending on how the game develops, Klinsmann could bring in Kljestan and Alan Gordon for offensive spark in the second half.

Click here for the CONCACAF standings after four games. Mexico is through in Group B, with El Salvador and Costa Rica battling for second; Panama leads Group C, with Honduras edging Canada for second on goal difference—and preparing to meet them in a decisive Oct 16 game.

For U.S. fans, they are the sad, sad highlights. For Guatemala, they’re a historic landmark—the victory marked the first time that nation has qualified for a World Cup at any level, in 92 years of playing the sport:

From the opening whistle, this one had the atmosphere of an upset-in-the-making. The crowd of 30,000-plus was rocking, the Guatemalan team was playing loose and feeling no pressure, while the U.S. was the opposite—increasingly so as the game went on and they failed to establish any kind of rhythm or control.

We thought that would change when Conor Doyle scored the equalizer with that well-taken chip, but no: The hosts came right back with the eventual game-winner just three minutes later.

Sure, the U.S. was missing striker Bobby Wood due to injury, and the dangerous Joe Gyau (remember that name) was not at 100% capacity, but still, this was a game the young Yanks should have won.

Most of the American players have bright professional careers ahead—careers which they can now resume earlier than expected—and this was arguably the most talented U.S. U-20 group ever assembled. But they will go down as the first American side in eight U-20 qualifying cycles (dating back to 1995) to fail to reach the World Cup.