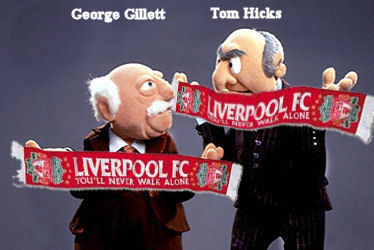 On Sunday at Goodison Park, another fan held a sign that read: Agents Hicks and Gillett: Mission Accomplished.

No, the departed American owners were not well liked in Liverpool.

So what advice is out there for the incoming American owner? Perhaps the Daily Star put it most succinctly: Splash Cash or Kop Are Going Down.

New owner John W. Henry was in the house on Sunday, fresh from promising to restore the club’s winning ways, and he got a firsthand look at what that will require. Everton dominated much of the game and fully deserved the three points on goals from Tim Cahill and Mikel Arteta.

The loss leaves Liverpool in 19th place, with only goal difference keeping them out of the cellar.

In other Yanks-in-England action, Clint Dempsey started, went the full 90, and picked up a yellow card in Fulham’s 2-1 loss to Tottenahm.

Eddie Johnson came on in the 84th minute of the Cottagers’ loss.

Stuart Holden started and went the distance for Bolton, which got a 90th-minute winner from Ivan Klasnic to beat Stoke City 2-1 at the Reebok.

Friedel’s understudy, Brad Guzan, and young U.S. defender Eric Lichaj both dressed but did not play.

At the Molineux, Marcus Hahnemann was beaten by a 53rd-minute penalty from Mark Noble that lifted West Ham to a 1-1 tie with Wolves. Hahnemann made three saves in the match.

Jonathan Spector did not dress for the Hammers.

Elsewhere, Manchester City got two goals from Carlos Tevez—who now has an astonishing 28 in his last 31 league games—and a beautiful stoppage time strike from David Silva to hold off scrappy Blackpool on the road by a 3-2 score.

Manchester United could only muster a 2-2 draw at home against West Bromwich Albion. After the game, the Red Devils heard out-of-favor striker Wayne Rooney, who played only 19 minutes on Saturday, announce that he won’t sign another contract at Old Trafford and will look to ply his trade elsewhere. Yikes.

In London, Arsenal rejoined the title chase with a scrappy 2-1 win over visiting Birmingham, but the victory lost some luster when 18-year-old midfielder Jack Wilshere was shown a straight red—and got a three-match suspension—for a reckless challenge in stoppage time.

Blackburn hosts Sunderland today to round out Week 8.

Sorry couldn’t resist—and we know, of course, that this Red Sox owner is the guy who helped break the Curse of the Bambino, not the one who started it.

But still, for hardcore Scousers, this is probably a case of out of the frying pan, into the fire. Yesterday, Liverpool’s board approved the sale of the team to New England (emphasis on New) Sports Ventures, an outfit headed by Boston Red Sox owner John W. Henry.

Yes, the debt-ridden Reds are going from one American ownership group (Tom Hicks and George Gillett) to another, pending approval by the Premier League, and a resolution of a legal dispute with Hicks and Gillett.

So what do the locals think of it? The response is surprisingly mixed; we expected reaction more in the vein of “Built By Shanks, Broke By Yanks.”

“Right royally rifled” just moved to the top of our list of go-to phrases for 2011.

NOTE: Our gracious and usually faultless hosts here at WordPress have been having major malfunctions today. We have been unable to access the BP mixing console all day, until now—and we’re still unable to post pictures, among other technical difficulties. Not good times. 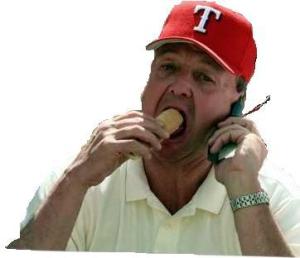 The rocky ownership reign of Liverpool’s American owners Tom Hicks (left, enjoying a hot dog and an important phone call) and George Gillett, appears to be less than a month away from its conclusion.

The Guardian reported yesterday that the club’s loans with the Royal Bank of Scotland (RBS) have been placed into that institution’s “toxic-assets division,” which … well, we don’t speak finance, but that can’t be good.

Apparently, it’s not: the deadline for refinancing the loans—the duo owes £ 237.4 million to the bank—is October 6, and the Guardian is suggesting that’s the day Hicks and Gillett will be forced to sell the fabled club.

Perhaps that’s just as well, as the relationship between the owners and Scouse fans has been hostile from the get-go, with highlights including a supporters’ group calling Hicks and Gillett “a pair of liars” in an open letter to the head of the RBS, and Hicks’s son, Tom Jr., delivering a succinct, “Blow me, f*** face,” via email—this one here—to a badgering fan—a retort that got him relieved of his duties as an exec with the club.

American-owned Liverpool FC confirmed today that coach Rafael Benitez has parted ways with the club, giving us an excuse to post this exclusive clip of what really happened in the dressing room at halftime of Liverpool’s historic comeback win in the 2005 Champions League final.