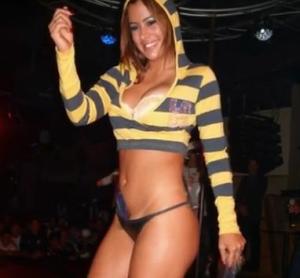 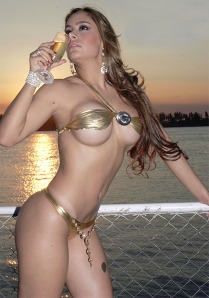 Busty, budding Paraguay superfan Larissa Riquelme—that’s her up there, and here, and here—has promised to run naked through the streets if her country wins the World Cup.

Her vow came about in response to an identical one made by Argentina coach Diego Maradona.

Their pledges may be identical, but the outcomes, in terms of spectator satisfaction, would be polar opposites.

And not only is Riquelme sadly far less likely to have to make good on this than Maradona (shudder)—because Paraguay is going to lose to Spain on Saturday—but she added a caveat: She says she’ll do it, but “with my body painted with the colors of Paraguay.” … Copout!

All right, Backpost is headed to the beach. We’ll try to post between tiny-umbrella-capped drinks over the holiday weekend.

In the meantime, here are our picks for the semifinals: 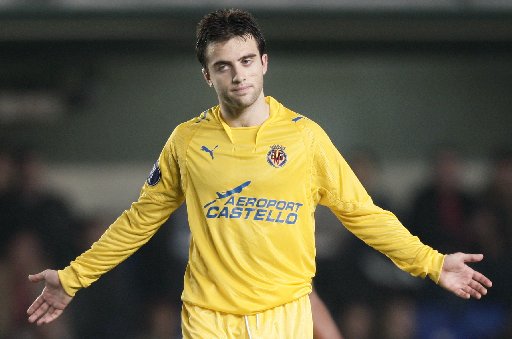 We do not live in a perfect world. You know this. Sure, there are many perfect things in our world, like Christina Hendricks, Totonno’s pizza, and Pappy Van Winkle’s 20-year-old Bourbon. But the world as a whole? It’s a few bits short of a byte when it comes to perfection.

U.S. soccer fans know this too. Despite what the message boards at BigSoccer frequently suggest, they do not live in a fantasy world.

In a perfect world for them, Charlie Davies would be 100% fit, and Villareal striker Giuseppe Rossi would be playing for the U.S., where he was born and bred, and not for Italy, where he moved as a youngster to play for Parma’s youth team.

Those are just two examples of how things might have been for the U.S. national team. There are more. Here then, a look at the U.S. provisional roster if things had broken just a little differently (changes in bold):

No changes! When it comes to goalkeepers, the U.S. may not be perfect, but it’s pretty damn good.

In a perfect world, Subotic—who played for the U.S. at both the U-17 and U-20 levels—doesn’t get insulted by U.S. youth coach Thomas Rongen, as he claims he was here*, and then choose to play for Serbia at the senior level.

The German-American Jones, a highly regarded midfielder in the Bundesliga, declared his intent to play for the U.S. back in June 2009, but was unable to recover in time from complications following surgery on a hairline fracture in his leg.

Picture it: Davies is healthy, Rossi opts for the U.S., and the 6-2 Ibisevic, who has 35 goals in 80 appearances for Hoffenheim in the Bundesliga, doesn’t slip through the cracks of the U.S. system after starring at St. Louis University. On second thought, don’t picture it; you’ll drive yourself crazy. It’s not a stretch to say that this group could have given the U.S. one of the top strike forces in the world.

Out of this provisional roster, Bradley could field a World Cup lineup that looks like this:

With Davies coming off the bench in Rossi’s spot; Bradley, Clark, Holden, and Feilhaber all available for midfield depth; and Bornstein, Spector, and DeMerit as backline subs. We’d drop Bornstein altogether, but then the roster would be a little light on outside backs.

Some might say that Bradley is a better option in central midfield, but Jones had been tabbed as an automatic starter by most observers, had he been healthy, and we think Edu’s a shade better at distributing than Bradley. But we wouldn’t argue with Bradley being in there, either.

Of course, the U.S. doesn’t have this lineup—which would be a bona fide threat at South Africa 2010—and it will have to make do with the one it has. Which is not bad by any means, but not all it could be—in a perfect world.

*If that link doesn’t work, here’s the juicy bit on Subotic/Rongen, courtesy of ESPN’s Doug McIntyre:

Move on is exactly what Subotic did after getting cut from the U20 squad in 2007. Thomas Rongen, the U.S. coach, insists the decision was based on the player’s groin injury, but Subotic — then 18 and a first-year pro in Germany — was still stewing over Rongen’s assertion a few months earlier that he had “not accelerated over there to the point where we feel he belongs on the team.”

Said Subotic upon being cut: “Never in my life have I heard that a high-level coach publicly criticizes a player. I still don’t know what he saw in the other players, and what he didn’t see in me.”

The following season, Subotic was named the best defender in the German second division